Retirement is very often considered the light at the end of the tunnel of your career. At AAG, we know better than anyone that retirement is something nearly everyone strives for, and they spend the better part of their adult lives saving money and making plans to ensure that their retirement years are comfortable. These strategies tend to differ as you look at demographics.

Given this information, we wondered how different generations and groups prepare for retirement. To find this out, we conducted a nationwide study centered around retirement trends, looking specifically at the differences between generations and gender. 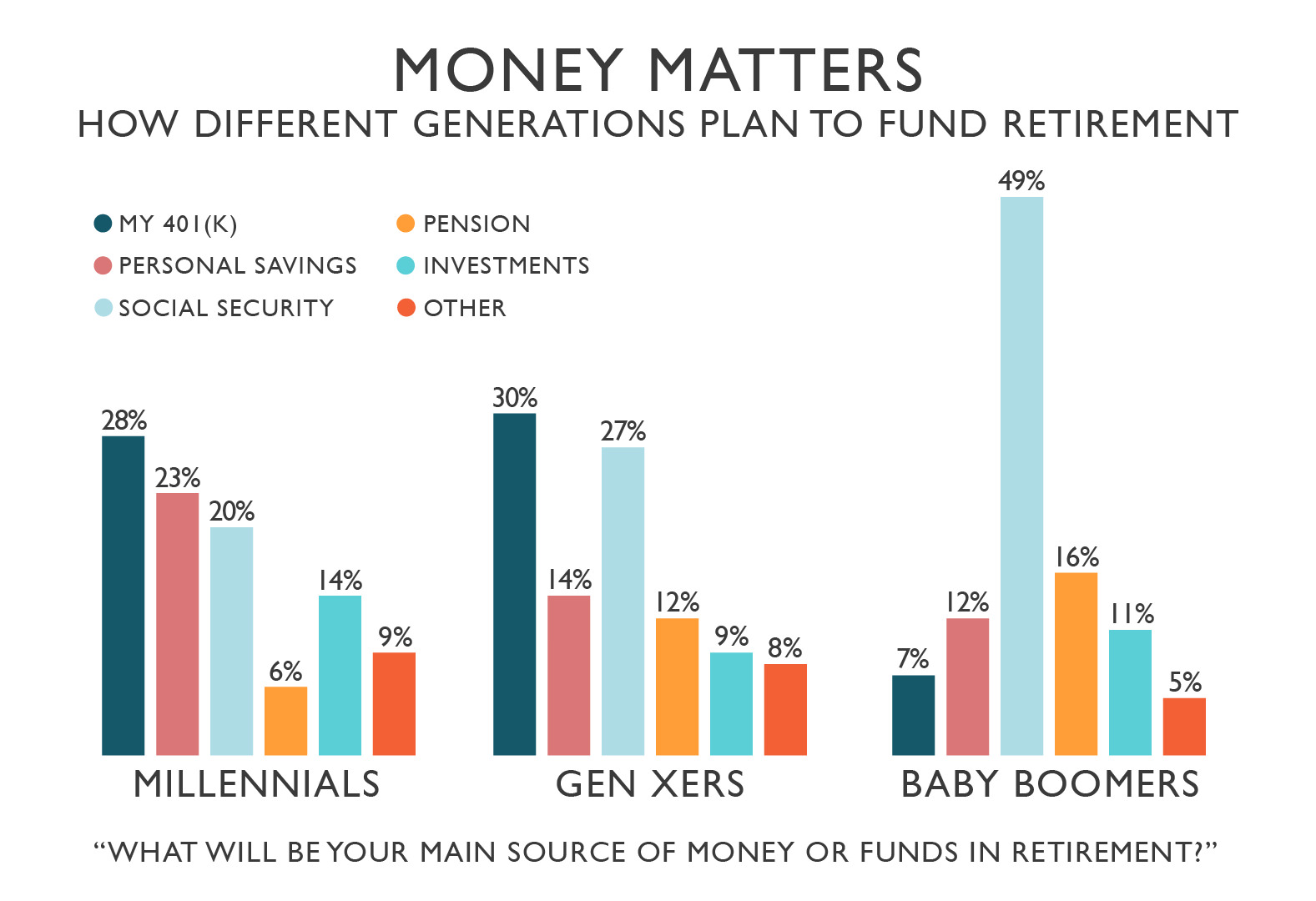 Before retirement can happen, you need to make a detailed plan for how you will fund your years after receiving a steady paycheck. We took a look at how Millennials, Gen Xers, and Baby Boomers are planning to fund their retirement years. While some retirement statistics weren’t much of a surprise, others were a little more interesting.

For example, almost half (49%) of all the people who identify as Baby Boomers plan to depend on social security as their primary source of their retirement income, while only 20% of Millennials are planning to follow that same route.

One finding that was more surprising, however, was that 23% of the Millennials surveyed plan on using their personal savings as their primary source of funding for their retirement, which is significantly higher than the other generations. 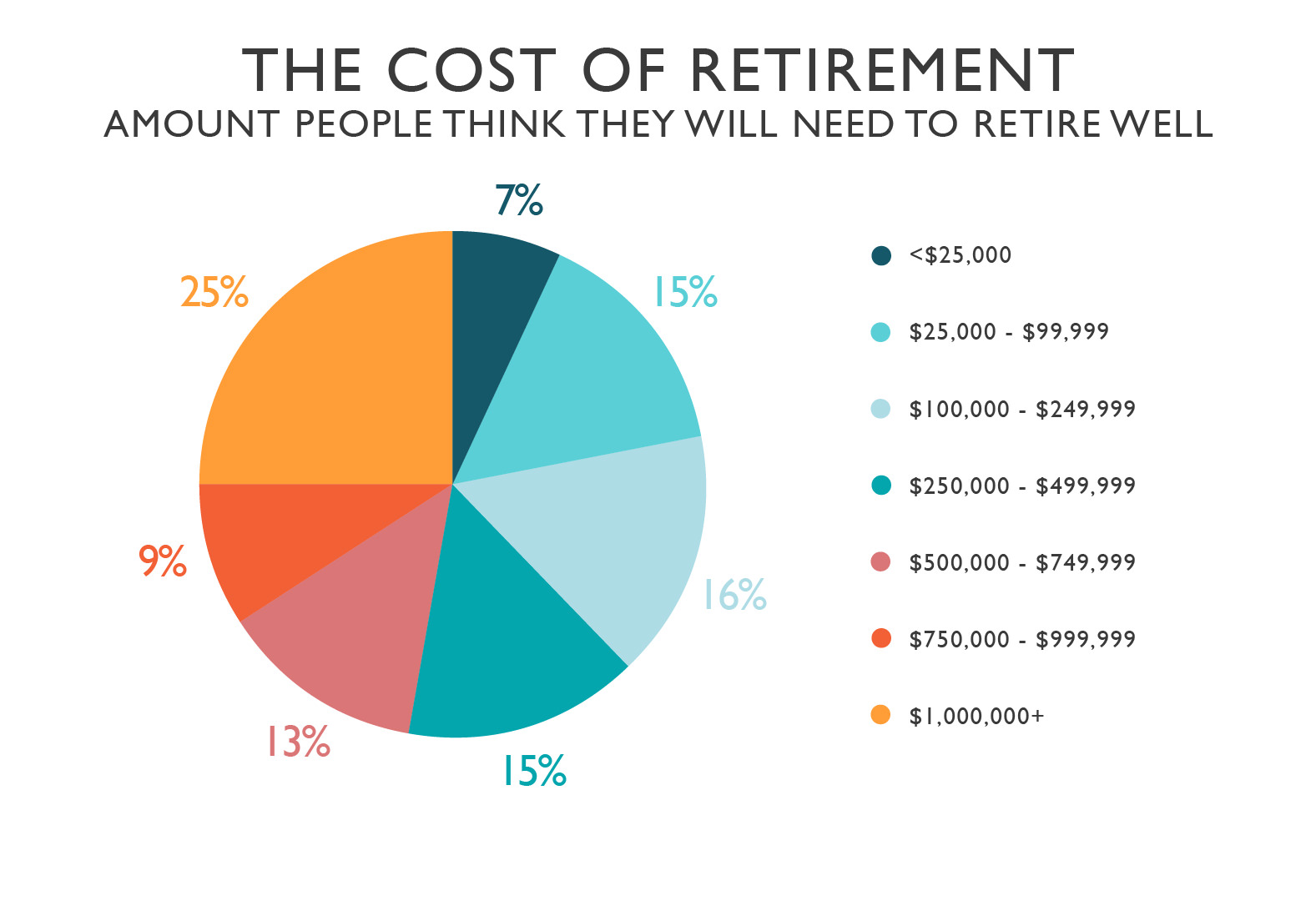 Speaking of retirement income, we also wanted to know how much money people thought would be enough to retire well. A quarter of those surveyed believe that they need at least $1 million to retire comfortably. On the other end of the spectrum, only 7% of people would like to retire on less than $25,000. Other than those outliers, the rest of the respondents are split relatively evenly across the income breakdowns. 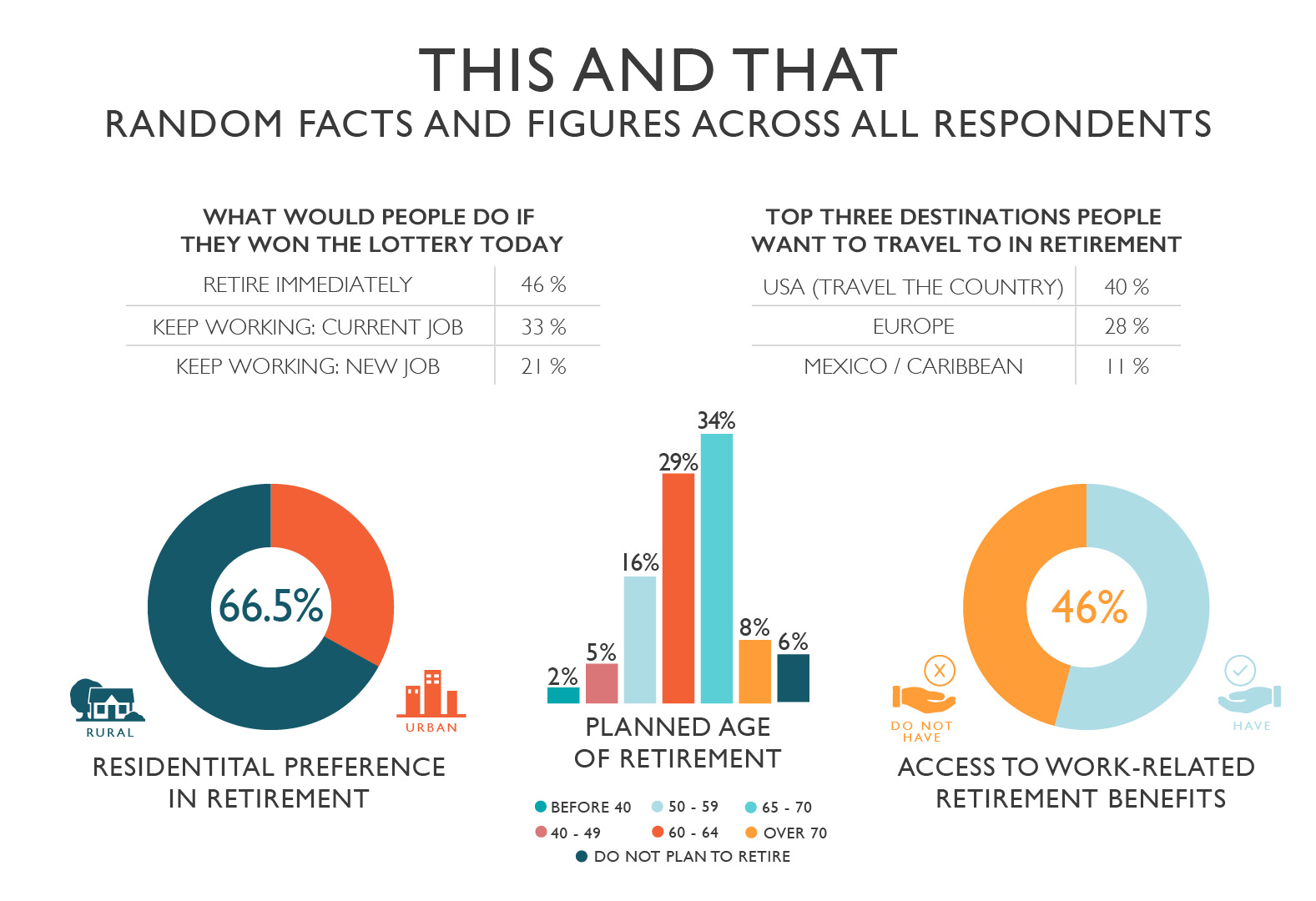 What would you do if you won the lottery? It’s an age-old question and we finally wanted some answers. According to 46% of the population we surveyed, people are very likely to retire right away. Six percent of people, however, would not retire from their jobs at all, which was surprising. We assumed that virtually everyone would want freedom from their 8-to-5.

The majority of people who responded to our survey said that they plan to retire between 65 and 70 and prefer to live in rural areas, as opposed to urban metropolises. And a large majority of this group would prefer to travel across the USA than anywhere else.

Another interesting fact that we found during our research was that a whopping 46% of people don’t have access to work-related retirement benefits, so they have to find alternative ways to fund their futures. 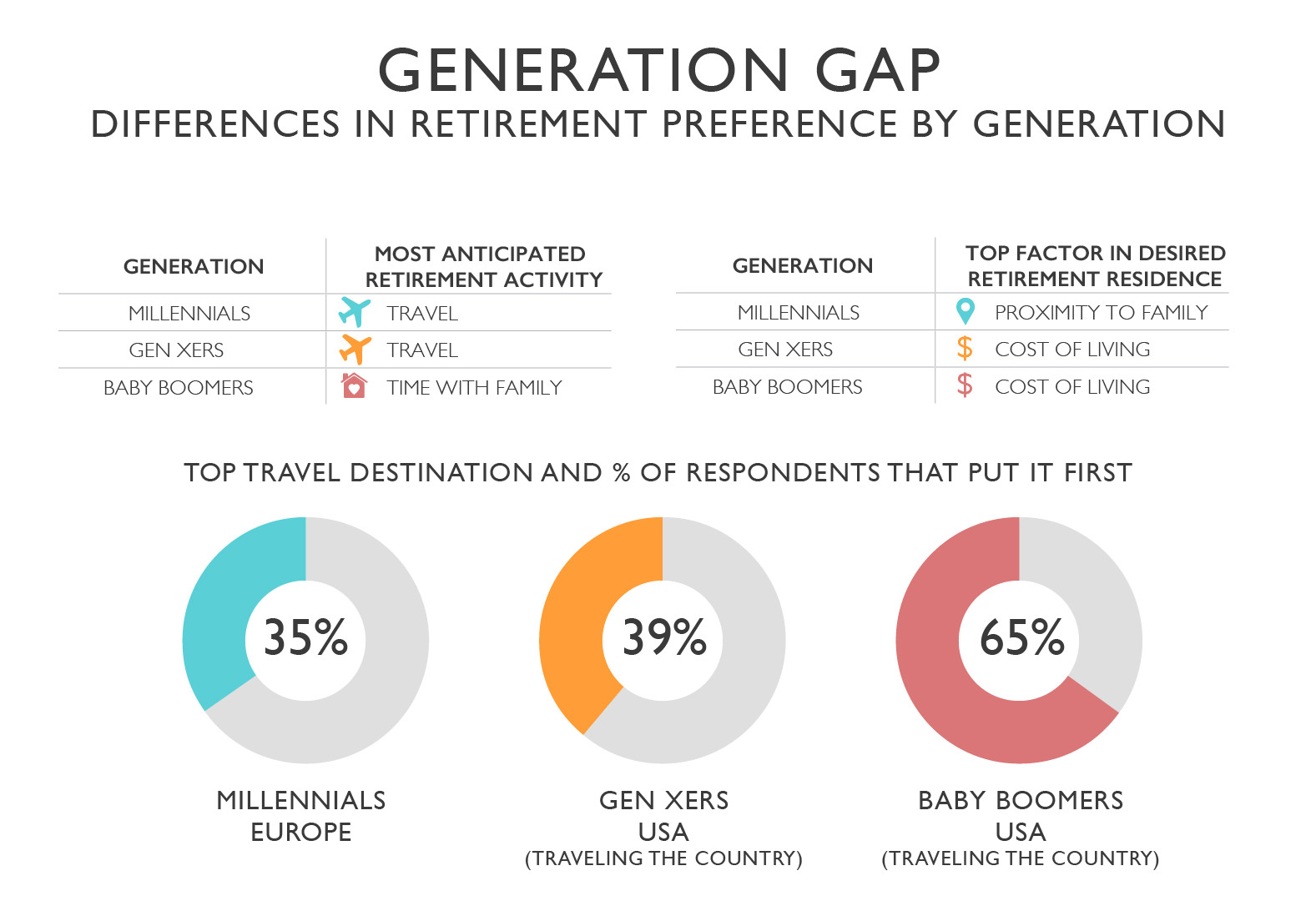 How do the generations differ when it comes to retirement preferences? For starters, Gen Xers and Millennials both look forward to traveling during their free time, while Baby Boomers look forward to spending more time with their families.

We also looked at the various factors that retirees take into consideration when finding a place to settle down. For both Gen Xers and Baby Boomers, the top factor was the cost of living in an area, while Millennials care most about proximity to their family. 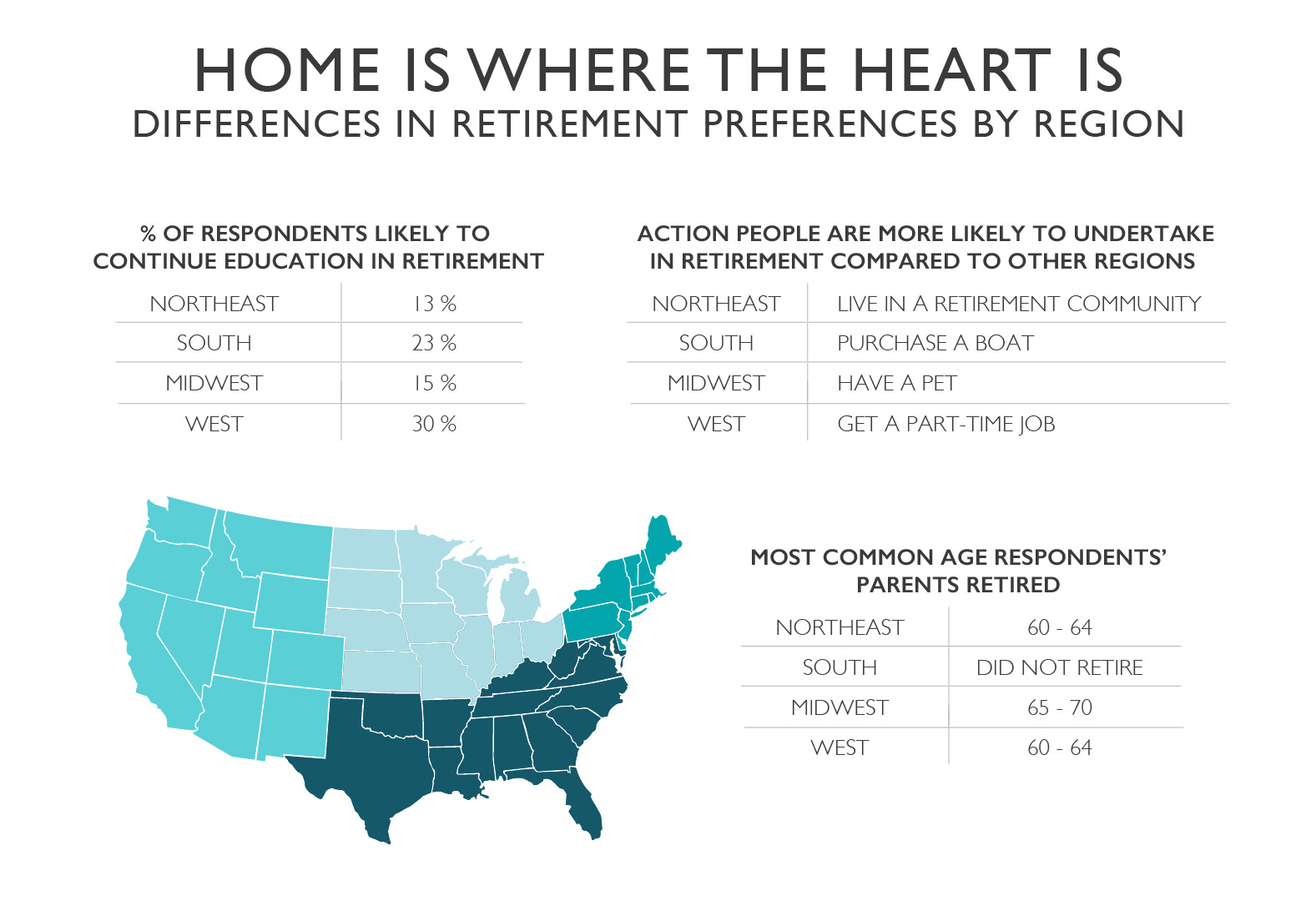 The West proves to be the region with the most drive to keep busy during retirement because 30% of the respondents are planning to continue their education and consider getting a part-time job. In the South, however, the majority of our respondents decided that leisurely activities, like purchasing a boat, were more up their alley. 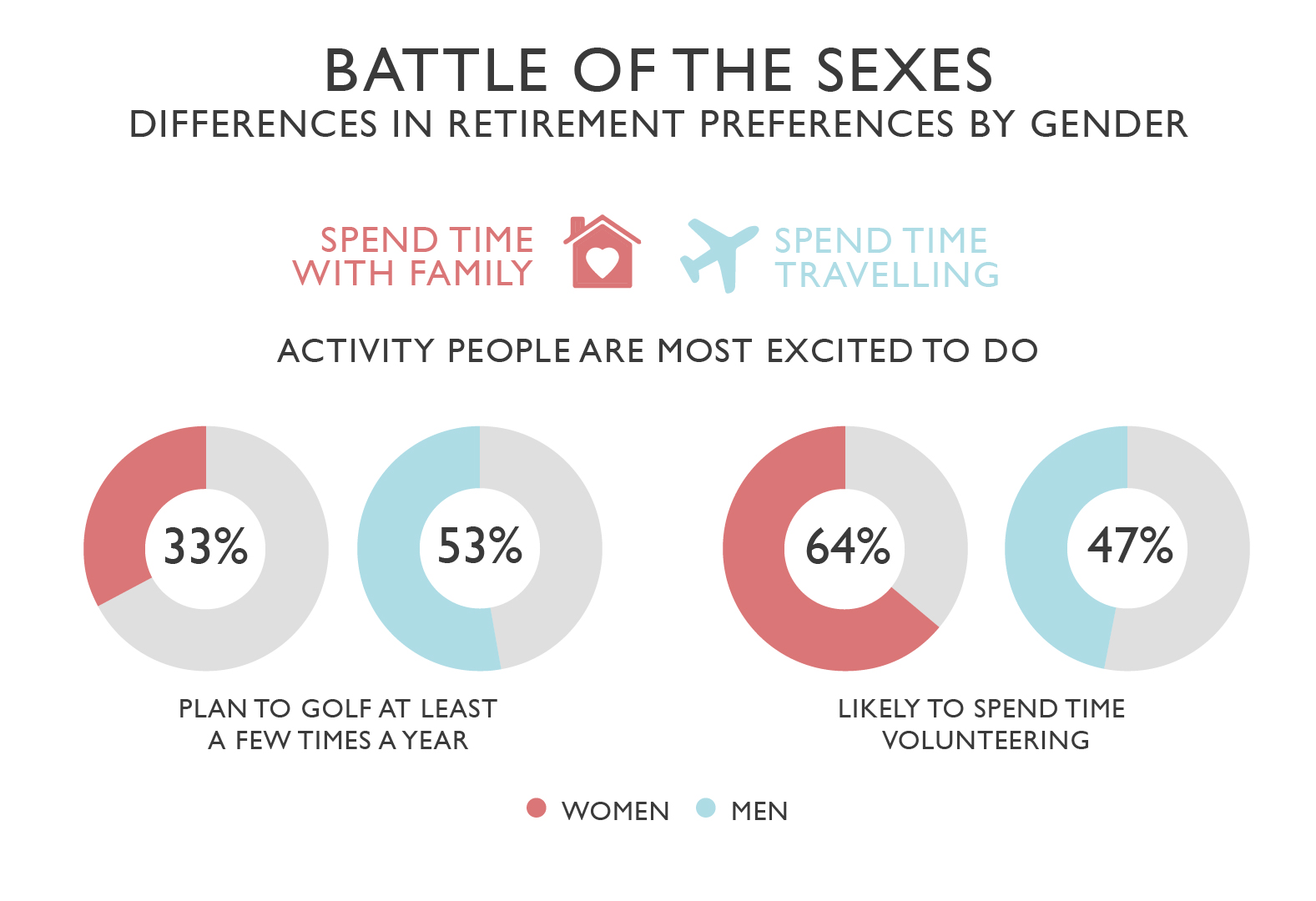 What do people most look forward to in their retirement? The answer changes depending on gender. While women are most excited to spend time with their families and are more likely to spend some of their time volunteering, men are more excited to travel and will likely hit the golf course at least a few times a year. 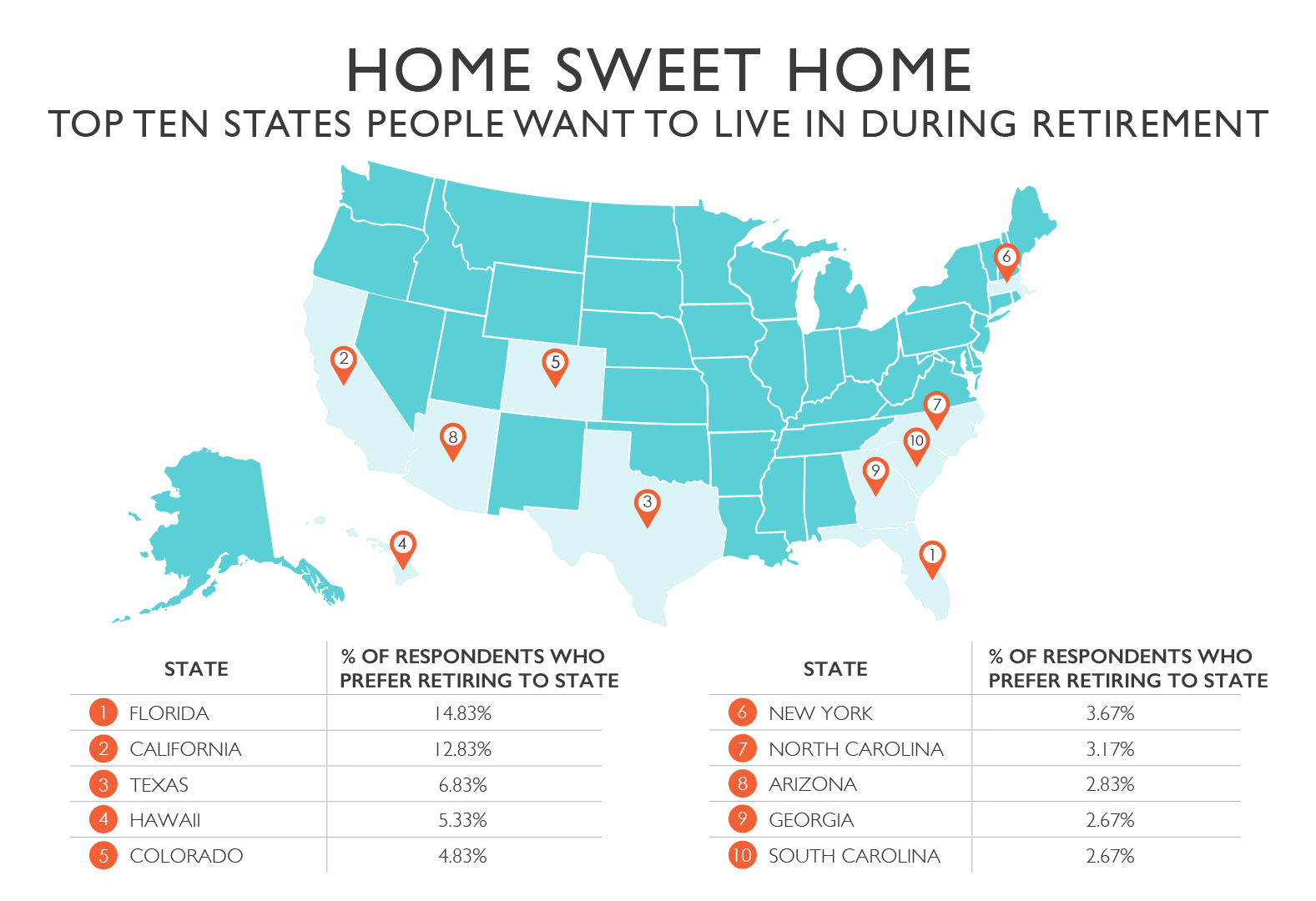 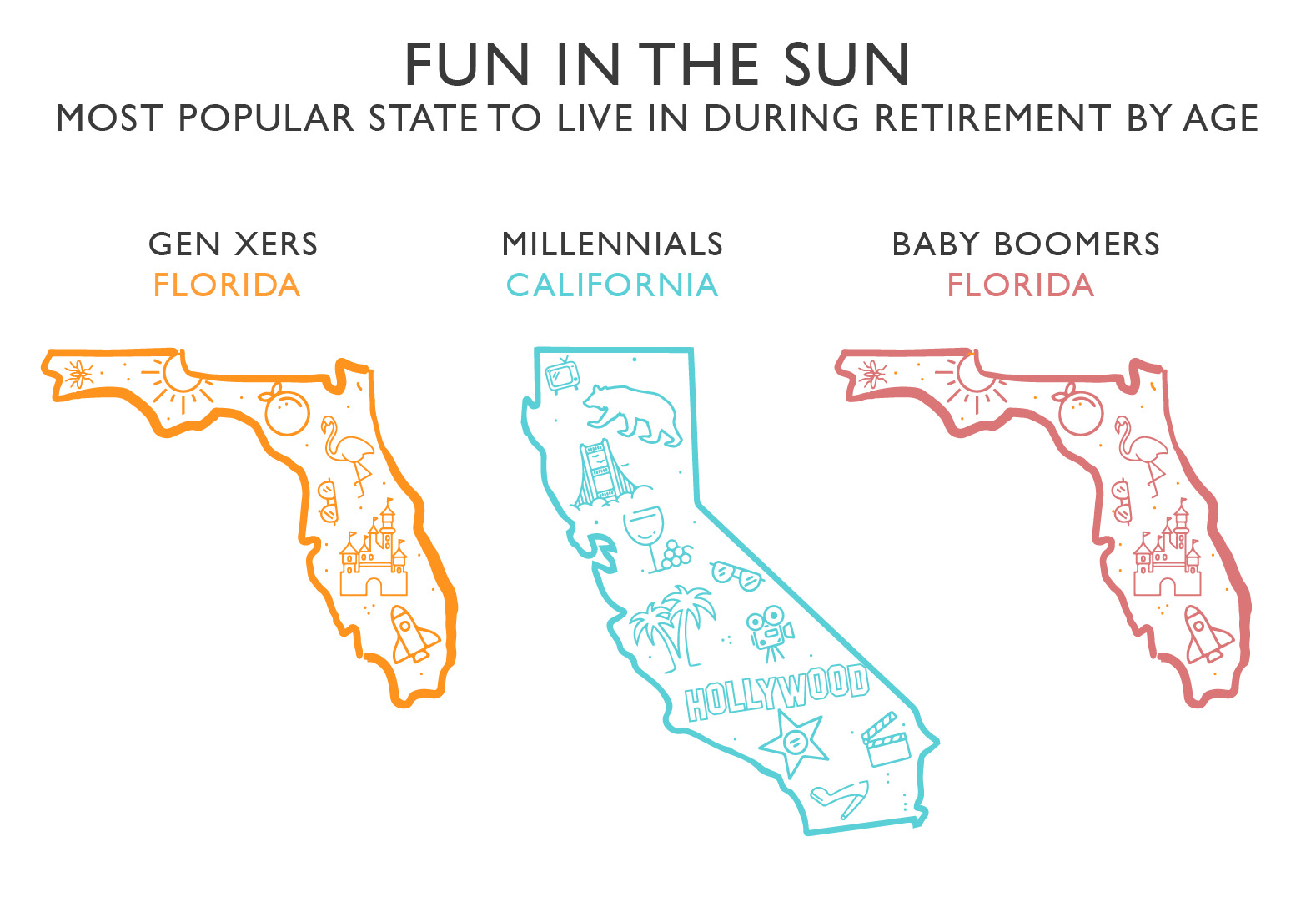 While Gen Xers and Baby Boomers prefer warm destinations, namely Florida, for their retirement residence, Millennials are more inclined to head West once they hit retirement age. According to the study, the majority of Millennials would choose to retire in California over any other state. 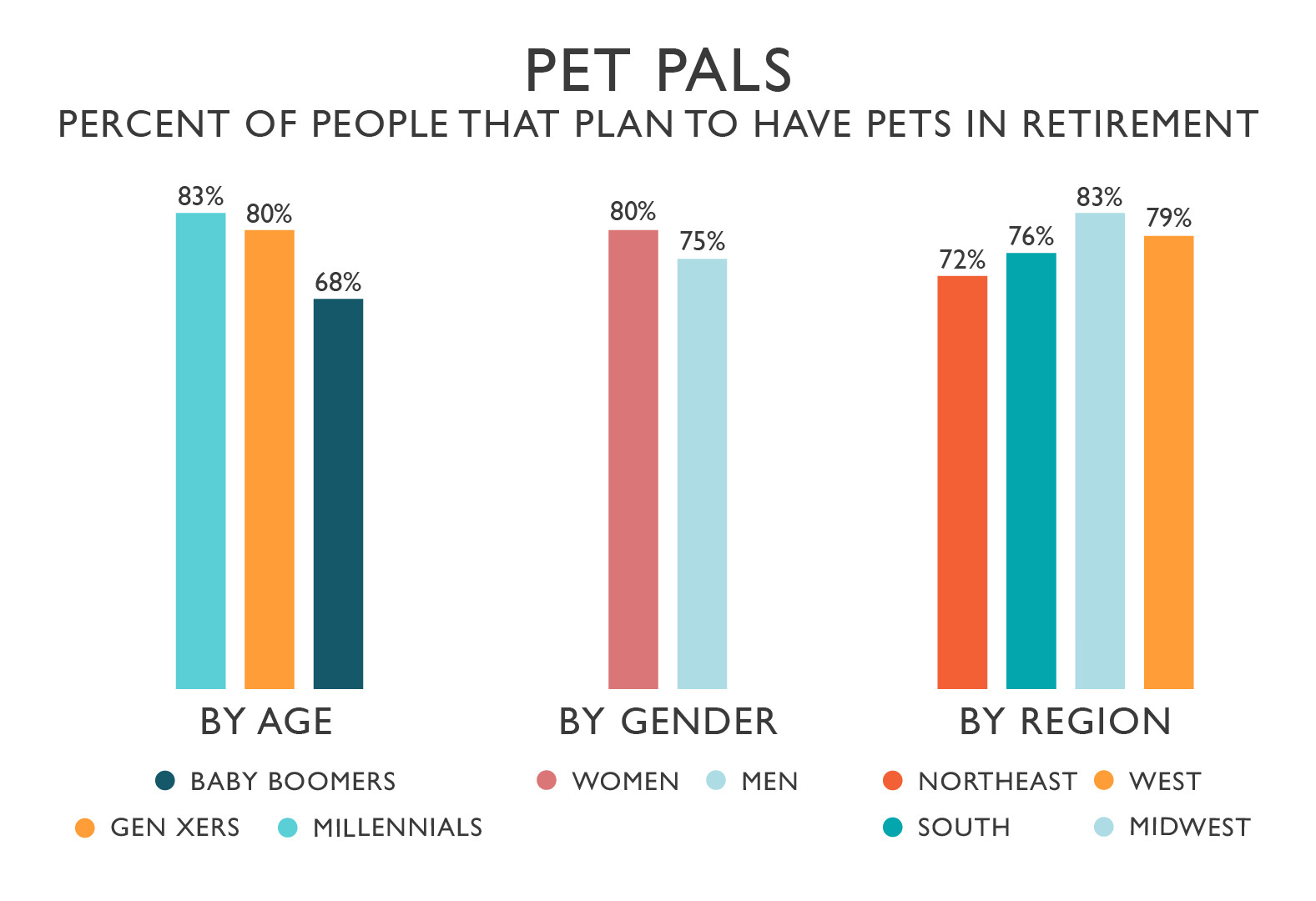 Of course, we can’t forget about pets. There seems to be a consensus across age, gender, and region that most people would like to have a pet in retirement. The least likely demographics to want a furry friend in retirement are Baby Boomers, males, and people who live in the Northeast. Even then, well over half of the population across all categories plan to have a pet for companionship in retirement.

No matter what you envision when you think about your retirement, AAG is here to help. As reverse mortgage experts we have helped our customers live their best lives in retirement and would love to help you do the same!

What do people most look forward to in their retirement?

The answer changes depending on gender. While women are most excited to spend time with their families and are more likely to spend some of their time volunteering, men are more excited to travel and will likely hit the golf course at least a few times a year.

How do the generations differ when it comes to retirement preferences?